Her Sport Her Way Champion: Recognises a woman for her outstanding achievements during 2019, as a coach, official, administrator or leader, and a commitment to furthering opportunities for women and girls to participate.

During 2020, Claire Polosak cemented her reputation as a top-class Cricket umpire through an impressive list of umpiring highlights. Claire was:

Claire’s commitment to developing women and girls continues off the field in her role at Cricket NSW.  This involves delivering community officiating workshops across the State as well as developing umpires throughout the pathway. In 2020, Claire’s efforts resulted in:

Claire’s journey as a cricket umpire of the highest standards has inspired many girls and women to take up umpiring.  Her work nurturing these girls and women on their journey ensures that they receive the training and support they need.
While not a 2020 achievement it must be noted that Claire was appointed the fourth umpire for the Australia v India Test matches in January 2021 – the first woman to officiate in a Test in Cricket’s 144 year history. 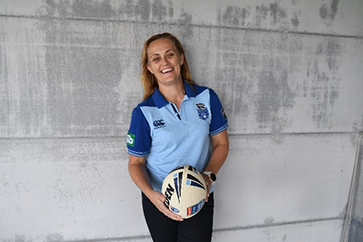 Her Sport Her Way Trailblazer: Recognises up to three women whose exceptional efforts over the long-term have advanced the opportunities for women’s and girls’ involvement in sport.

Over the past 14 years, Yvette has been dedicated to removing barriers for women and girls who want to play or be involved in Rugby League.

Yvette’s passion and drive to grow women's rugby league began in 2007 when the Sydney Metropolitan Women’s Rugby League competition was at an all-time low with just three teams competing. Within three years they had helped to double the number of teams playing.

She was involved in the planning of the first women’s World Cup held in Australia in 2008 and was President of the Australian Women’s Rugby League in 2009, championing the development of the women’s game across the country.

In 2014, Yvette became the first female Head of Competitions for NSW Rugby League in its 107-year history and has overseen significant growth in women and girls playing the game.

She has created an unbroken pathway for female participation across the state - from under 6s through to open divisions, including supporting the development of the Harvey Norman Women’s Premiership and the Tarsha Gale Cup.

In 2019, Yvette introduced the non-tackle Monarch Blues Tag to provide another way for women and girls to try the game.

The culmination of her tireless work has left a significant overall legacy in Rugby League that will not be forgotten. Her Sport Her Way Local Champion: recognises woman involved at club or community level sport for their contribution and commitment to increasing opportunities for women and girls during the calendar year.

Natasha brought together and coached the Workers Gol Gol Cricket Club women’s premiership side - a diverse group of girls from primary school age to stay at home mums, women from the LGBTIQA+ community as well as girls with special needs such as on the autism spectrum.

Natasha created a welcoming and inclusive environment where injured players took on roles off the field so that they could continue to contribute and be part of the team.

Natasha started the Sunraysia Junior Girl’s competition as a feeder for the already existing women’s competition in 2019 and has seen it grow to five teams in 2020.

In 2020, Natasha has encouraged parents, especially the mums to get involved with scoring and to actively participate with coaching the kids.

Natasha is a mother of three girls who love their cricket, and this provides her with the drive and motivation to grow cricket in the remote parts of the state. Her number one motto with any junior girls’ activities is “a whole lot of fun, with a little bit of cricket. Her Sport Her Way Young Achiever: recognises an individual under 25 who has made a significant contribution to the advancement of women or girls in sport during the calendar year.

Shivani Lakha is a major event volunteer and member of the Tennis NSW Youth Advisory Group, a volunteer at Eastwood Thornleigh District Tennis Association, and a coach at Voyager Tennis Academy.

Shivani is a young leader who has consistently contributed to tennis and in particular youth and female development.

In 2020, Shivani was appointed to the Tennis NSW Youth Advisory Group, drawing on her experience with the Tennis NSW Future Leaders Program in 2016 and as a program mentor in 2018 and 2019.

During her time in this role, Shivani has contributed significantly to promoting a female youth perspective in areas such as COVID-19 engagement and recovery, safeguarding children, competitive tennis, and youth leadership.

Shivani has worked tirelessly to ensure that the Tennis NSW Future Leaders Program opportunity was promoted through her local tennis club.  As well as generating the highest number of applications from any single club in the program’s history, four of her clubmates – all young women from culturally and linguistically diverse backgrounds – were accepted into the program.

During 2020 Shivani has been an active contributor to the Sheroes program which aims to develop women by providing volunteering and engagement opportunities for them across NSW.

Her Sport Her Way Outstanding Organisation Award:  Recognises an organisation’s significant contribution to the advancement of women’s sport during 2020.

Cricket NSW has a strong focus on girls’ Cricket through the Woolworths Cricket Blast foundation programs as well as the Sixers and Thunder Girls Leagues.  By the end of 2020 and despite the challenging COVID-19 environment, 250 girls’ teams registered to play 42 teams more than the same time last year.

With on-going travel and border restrictions around Australia, Cricket NSW worked with the NSW Government to host the entire Women's Big Bash League in 2020, delivering 59 matches in the world’s best women's Cricket league across 4 Sydney venues, culminating in a sold out final at North Sydney Oval where the Sydney Thunder claimed the WBBL06 title.

Leveraging the once-in-a-generation opportunity of hosting the ICC T20 Women’s World Cup, Cricket NSW continued to roll out the Daughters and Dads cricket pilot program, shifting to online learning when COVID-19 restrictions came into effect, and supporting local clubs and associations as they delivered female programs under the T20 World Cup Legacy Fund.